An Appeal to SYC Alumni 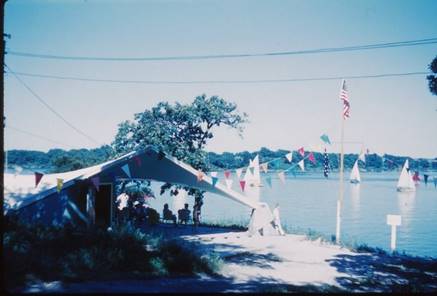 Those lazy summer days watching the sailing activity from the shade under the old hyperbolic paraboloid shelter?
Read more... 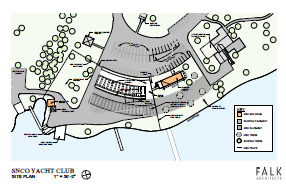 With 2021 being SYC's 80th year, plans are in-the-works for a major upgrade to club facilities to support future generations of local sailing enthusiasts and make room for new developments at Lake Shawnee.

Three lessons plus one

A guest blog from our newest member.

Yesterday, I took part in a Sweet-16 boat race at Lake Quivira in Kansas City.  It was beautiful weather with a moderate-to-fresh breeze on a lovely lake under a clear sky. Our hosts were fantastic and the race committee from the National Sweet-Sixteen Sailing Association was impressively organized.  My goal for this, my first event away from my home port, was to watch the other sailors, do what they did, and not tip the boat.  Instead, on the third leg of the first race, I capsized and turtled my boat with the top of the mast in the muddy bottom of the lake.  So, it was not a “successful” race, but it was a memorable one and one that taught me some valuable, basic, novice lessons.  Thinking about the experience, I have come up with three things that I will now do differently:
But you may be scratching your head that these are my top three lessons and not one of them deals with not tipping my boat over.  I have two responses to that: firstly, sailboats tip over.  It is an event that has happened to most experienced sailors.  While it can be dangerous, it is typically just an embarrassing inconvenience. However, the reason I tipped over is something I need to address.  I arrived that morning with the goal of just watching and learning.   But that goal had shifted dangerously at the time I capsized. I was last in line in the race but was within a hair’s-breadth of maybe overtaking a friend of mine in the next boat ahead of me. We were sailing with a 10-15 knot wind on our beam, all of us leaning back on the rail.   In that moment, with that goal, I did not let off the mainsail sheet when I should have, which was ridiculous.

I was the most novice sailor on the lake.  I had never sailed under those conditions. My two sons were crewing and had no previous experience crewing a S16--they had only crewed boats with one sail and two daggerboards. Each tack and jibe was a lesson in coordination and patience.  It was entirely appropriate that I be last in line and I should have been focussed entirely on managing the fundamentals.  If I had simply finished last, everyone would have patted me on the back, congratulated me on finishing under difficult conditions, and I would have learned a lot.  As it was, I let ego get the best of me.
So, I am more experienced for the experience.  I did get to enjoy a beautiful race, even if mostly as a spectator, and it was a great social event.  My sons performed well both in and out of the water and they are safe.  I really enjoyed our time together and I hope I'll be able to coax them back into a boat soon.  I thank God that we are all unharmed.  Next time on the water, I'll have my vest on, my rudder secure, I'll be stronger, and I'll focus on simply doing the best that I can.
Jason Gilbert